Entering the monumental entrance portal leads to the wide Court of Honour of the Medieval Castle with its imposing internal facade made of limestone and piperno (ancient Vesuvian stone). On the right hand side, almost at an angle, there is an ancient well, dated 1380, which is of importance for its capitals which show the first signs of the Italian Renaissance period. In the Court of Honour (capacity to hold 620 people) it is possible to have welcome cocktails, medieval shows, reception with flag wavers, etc. 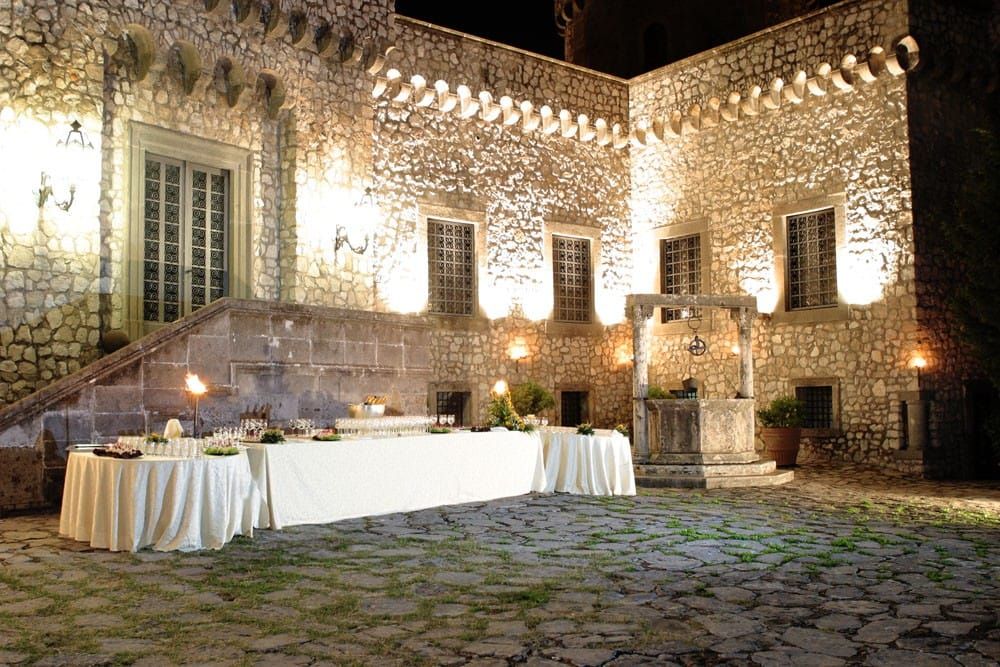 By way of an arched passage in the rampart of the Castle, a terraced garden is reached where the manor’s western tower has a view of the Mount Lattari. This garden terrace has the capacity to hold 250 people and it is possible to organize an aperitif, a musical performance or various other forms of reception 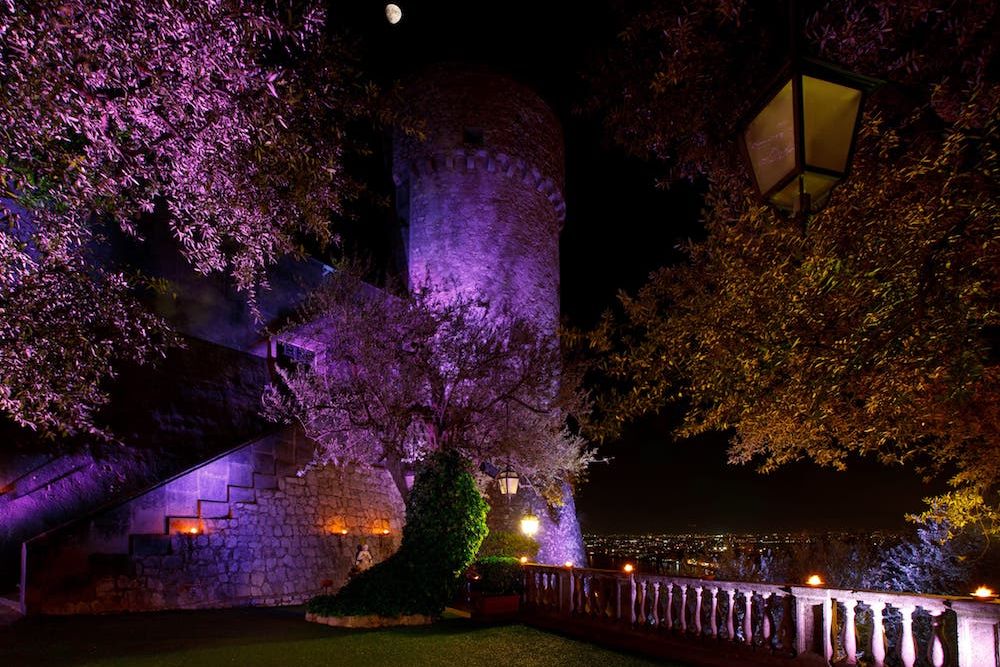 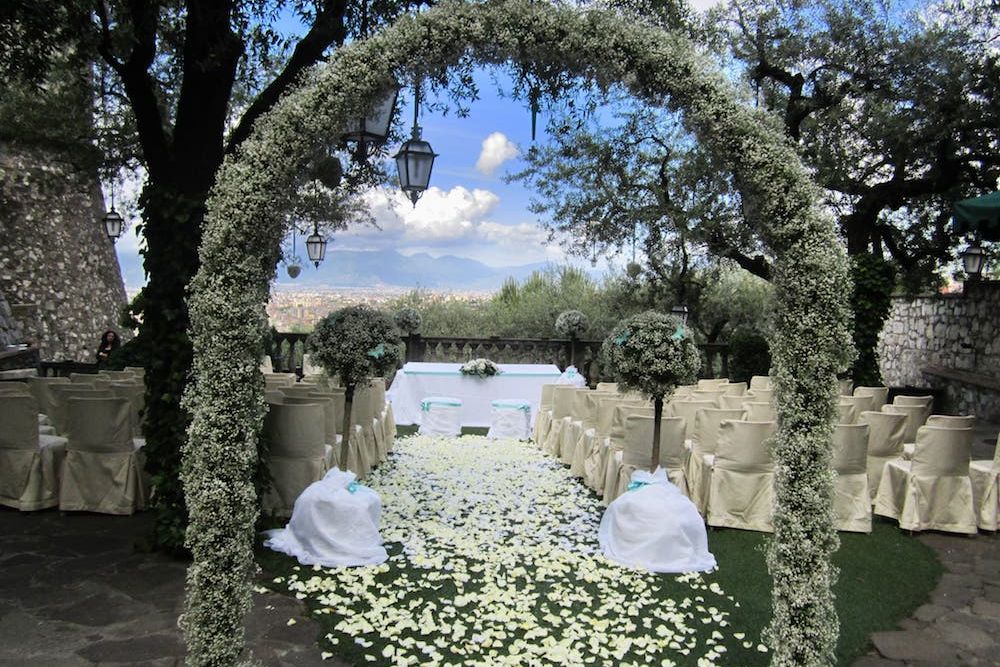 Descending by a monumental staircase made of piperno stone in Renaissance style, it is possible to reach another garden where it is possible to find: a large fishpond with spouting mask of the 16th century; another ancient fountain with two strong cherubs holding up a coat of arms; and a portal with the Madonna and baby Jesus. Finally, from the garden, there is a magnificent view of the Gulf of Naples with Mount Vesuvius. 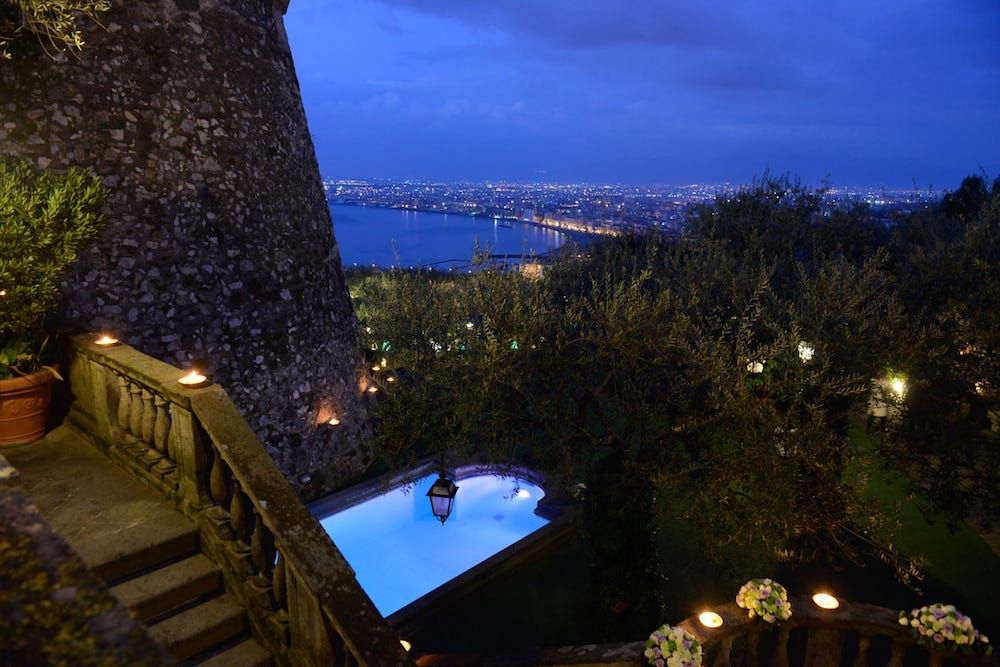 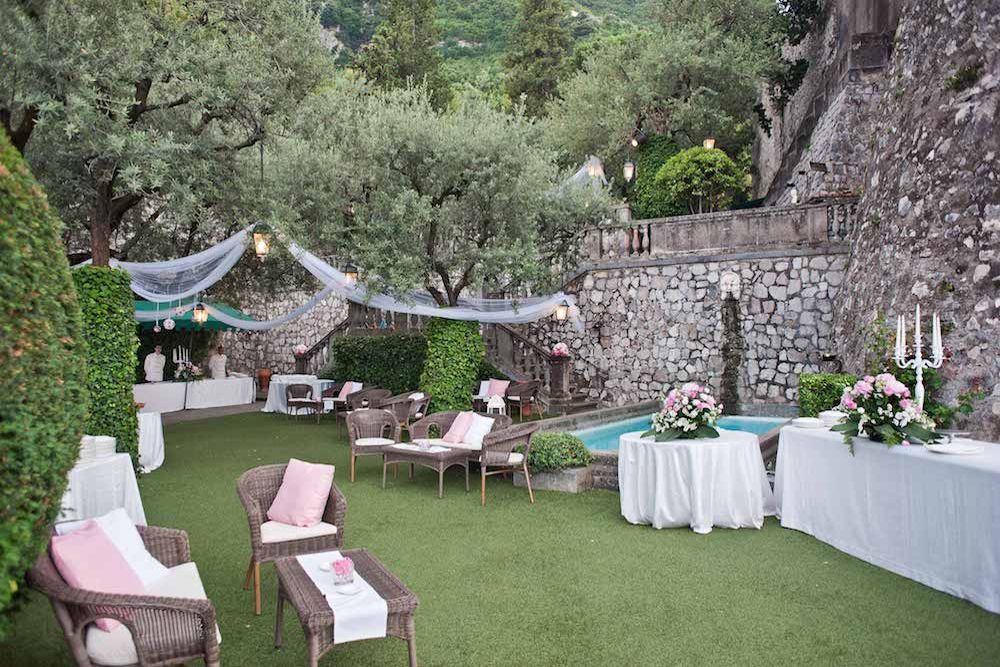 Descending through a passage in the defensive rampart dating back to the 400s, it is possible to reach the place where the ancient moat once was, in a luxuriant garden of olive trees with a Jardin d’hiver which can host up to 500 people comfortably seated at tables. 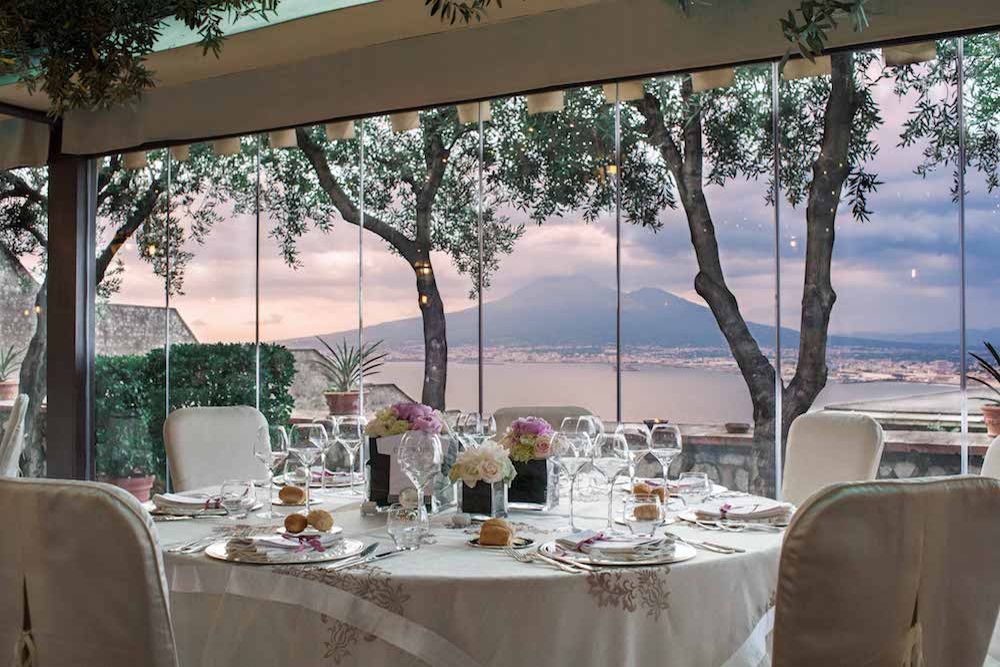 The Fortress (Rivellino), the Drawbridge and the Walls

Entering within the great medieval walls, the fortress is reached. This was a characteristic military construction in the second half of the 400’s for the positioning of artillery. Past the fortress and the drawbridge, it is possible to appreciate the beauty of the panorama by means of a walkway running along the walls (at times 20 meters high,), which leads down to the watchtower on the seashore. This was another entrance to the castle, perhaps the only one used in case of danger, when all the other entrances were jeopardized. The walls in the final part, towards the sea probably collapsed around the middle of the XVIII century; however, the part that remained was sufficient to allow those using the walkway to appreciate the grandeur of the walls (which were used to protect the city to the west ) and to appreciate how near the sea the castle was (giving it the name of Castle at Sea), especially in the past centuries, when there weren’t any docks of the port and the sea lapped the foot of the mountain. 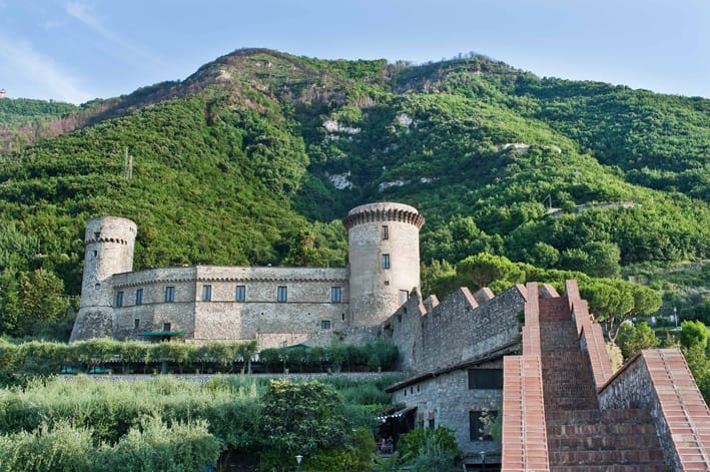 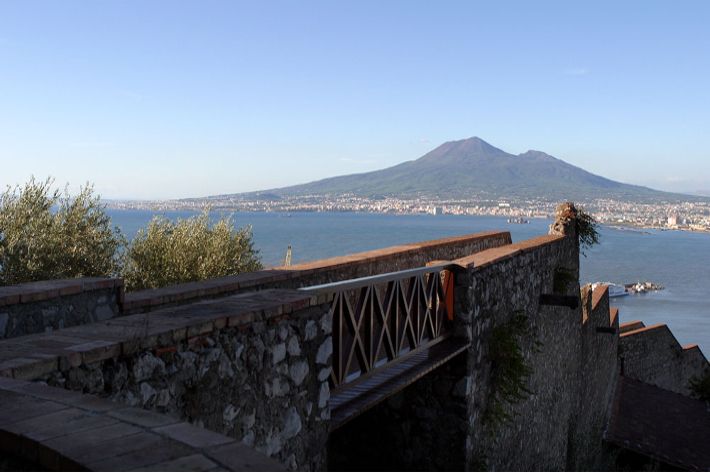 The Fireplace Hall can be accessed by passing through a gate. On the right is the door of a treasure chest of an Umbran city hall (“universitas”), dating back to the beginning of the 1700’s. To the left of the staircase, it is possible to note Medieval graffiti of ships that were engraved with charcoal on fresh plaster, presumably by convicts who were confined to the castle. In the second hall, there is another Renaissance fireplace with the date of 1447 on its hood, On the wall to the right, there are two small Renaissance portals. Once in the third hall on the right, there is another Renaissance fireplace which is rather unusual because its movement and decoration are obtained only through straight frames. On the same side, is a great tapestry from the 16th century which portrays the most important episodes of Saint Bernardine of Siena’s life rather than his funeral as some think upon first seeing it. Under the tapestry are choir stalls from the 16th centruy as well as an elevated choir platform on the other side. Under the staircase, a bishop’s chair, with a central panel bearing a reproduction of a bas-relief of 15th century Tuscan can be seen. 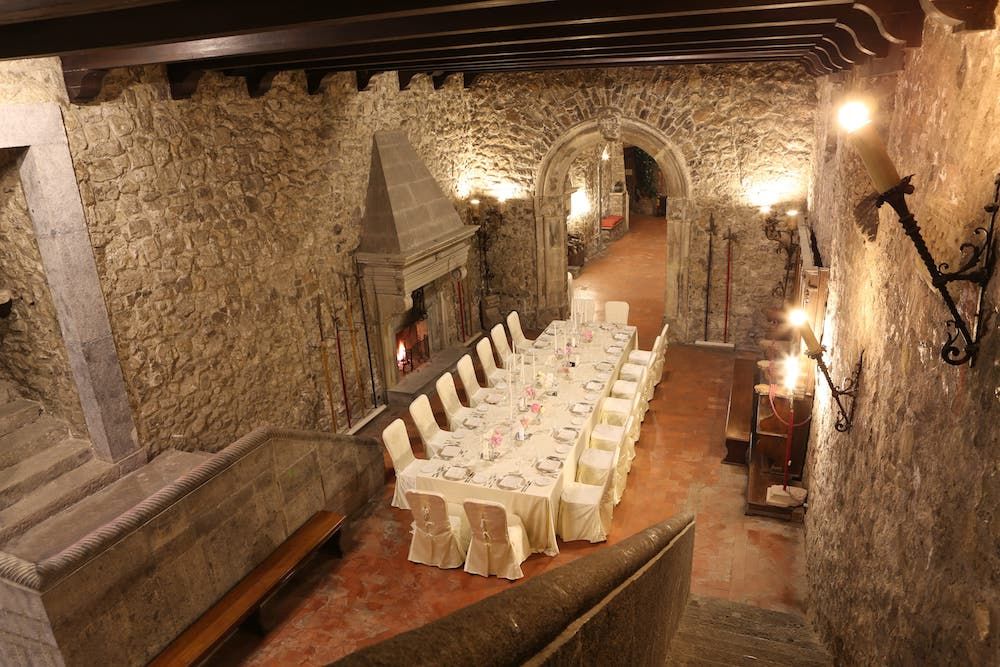 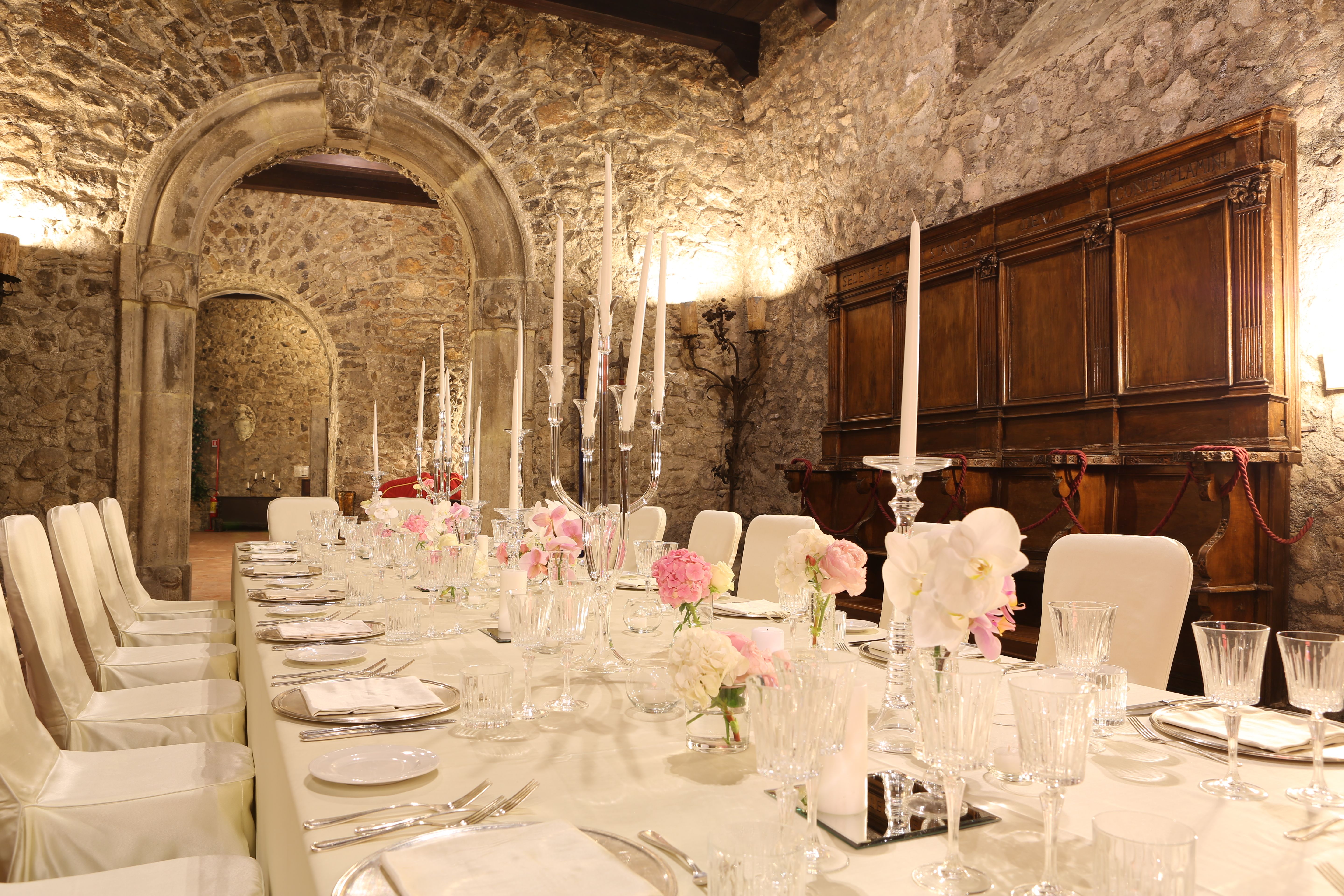 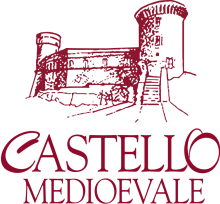 ©Copyright 2019. DES srl. All rights reserved. P.IVA:07011811218
Powered by This email address is being protected from spambots. You need JavaScript enabled to view it.